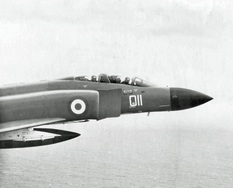 On that day, I was the XIII Sqn Duty Pilot.  There was a Lightning squadron on detachment at Luqa, but as they needed clear skies in their operating area and the weather wasn’t very nice, they’d just decided to scrub for the day.
Just before their man left the tower, the radio crackled into life.

In the background you could hear someone counting the number of rounds hitting their aircraft.

That must have been the point when they disappeared into cloud, and the Libyans gave up the chase.  As the air traffic controllers gave the C-130 a steer for Luqa, and offered assistance, the Lightning guy dashed off to stop his men ‘stacking’ for the day, and order them to scramble and intercept the Mirages.

But before the Lightning pilots could man their pursuit ships, the C-130 Captain cancelled his Mayday, and said he was going to head for Sigonella, the Sicilian airfield where the US Navy had a squadron of Lockheed P-3 Orion maritime patrol aircraft, and much better security.

Had he landed at Luqa, there would have been a lot of interest in his aircraft, which was almost certainly a bit secret.  Because the RAF was in Malta under sufferance, and all NATO aircraft were prohibited from visiting, it would have caused a huge diplomatic incident.  In addition, Malta was receiving a substantial amount of aid from Libya, so I’m sure they would have wanted to inspect the impounded aircraft.

Which brings me on to the visit of HMS Ark Royal.  When she arrived, there was a US Navy F-4 Phantom on board with a problem that had prevented it from flying off before the ship docked.  To avoid upsetting the Maltese government the Royal Navy decided to repaint it in Fleet Air Arm colours, and the ultimate ‘zap’ was well under way before they ran out of time, so it was carefully hidden away in the hope that no-one would notice.  I suspect the truth is that they were running out of paint!

Not surprisingly, they wouldn’t allow any photographs, but I did hear that the Americans insisted that when it was fixed, they should be allowed to fly it back to their ship as it was.

Bob Croton sent in these stickers to jog peoples memories. 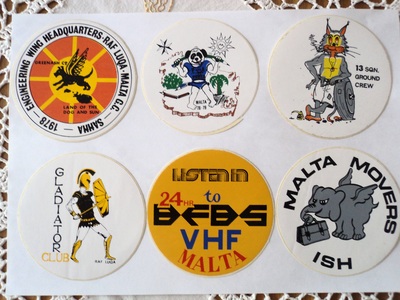 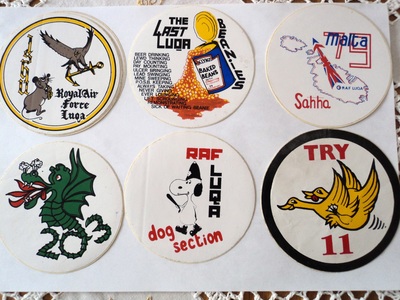 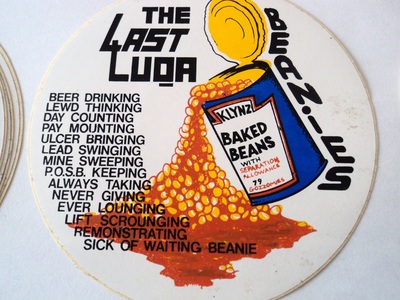 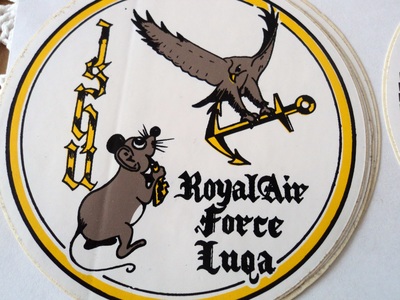 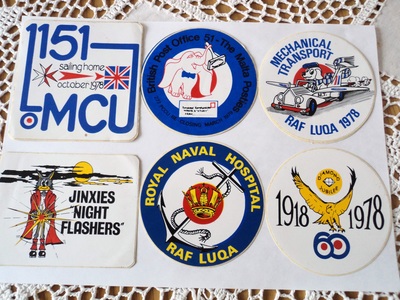 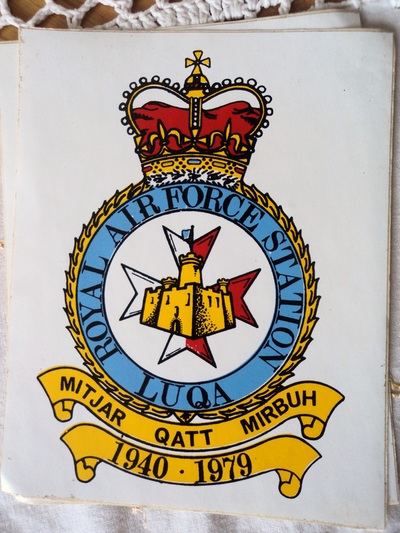 I was in the RAF (Signals) from 1958-61 (National Service with pay) and, after 1 year of training in the UK, was posted to RAF Luqa (that would have been 1959). My operational station, being in signals as an HF/DF Operator, was actually RAF Siggiewi, but based in RAF Luqa. I was eventually posted to RAF Idris (Tripoli airport), but retained all my wireless contacts with the guys I'd met in both stations. I also managed to get into the RAF Malta Command athletics team doing long jump, so I spent a lot of my 2 years in the Middle East in Malta and Cyprus representing the RAF at various competitions against the navy and the army. Anyway, would be very interested to see the "old" places again.

Memories from ﻿Mark Farrugia﻿ of an enthusiastic schoolboy in the days of Argosy's, Shackletons, Canberras, Phantoms etc.

My name is Mark Farrugia living in Malta and during my childhood I used to admire RAF aircraft taking off and landing at RAF Luqa.

I was born in September 1959 so I am now 54 years old. I remember some old aircraft landing at Luqa: The Argosy, Shackletons, Belfast as well as 13 and 203 squadrons based here. I also remember flight squadrons coming to Luqa for a month's detachment. They mainly were Lightnings of number 5 squadron and Phantoms of "treble one fighting cocks" squadron supported by Victor flight refuelling tankers. Once they were here, they used to practice target firing on a banner towed by Canberras. It was a great time.

This week I was surfing the internet in search of some memories of those times and came across your website: "RAF Luqa remembered", and this is why I was prompted to write to you to congratulate you for the wonderful and informative website. I am writing this email with tears in my eyes, remembering rushing to Luqa near the threshold of runway 24 after school hours to admire aircraft landing. It was like we had a daily airshow at that time.!!

I was keen on RAF aircraft spotting and I always followed with interest until the end British Forces in Malta in 1979. I was one of many Maltese who was deeply saddened by the British departure.

I used to hear BFBS Malta every day and I cannot forget the last transmission by Richard Astbury on the 25th March. I found a link of the last BFBS transmission on the internet which every time I hear it I feel great sadness:

I am proud to treasure 2 souvenir BFBS mugs which I had bought from the station at St. Francis Ravelin in Floriana before it closed down.

The British forces used to issue a newspaper " Dolphin & Eagle" and was distributed to around 5000 British personnel in Malta. I am also attaching a copy of one of the publications that I have kept for my collection. You are free to publish and share any photos of the attached in your website.

I am now a widower with 2 grown up children aged 21 and 24. My wife Anna passed away in August 2012 after a long battle with cancer. I live in the small village of Gudja, a stone's throw away from Malta International Airport.

Arrived in Luqa in the November, my first overseas posting and the duty 'Mooney', all was quite strange.  Working in the Commcen, some of the troops I had met before, so off for a beer in Buġibba, nice place, beer well not so good, but got used to it!!
The 'Airborne' bar in Luqa village was well frequented, great sandwiches too!!
Commcen: Cpl's Keith Parry, Les Birkett, Bill Bratty, Keith Bromage, Terry Westwood, Ray Grace (later commissioned).  Sgt Joe Murphy - sound man, worked with him when he was an FS at Northwood, then when he was a WO and WO Charlie Silence, Flt Lt West.

Troops:  SAC's Ritchie Morton, Steve Gill, Pete Theodopolus, 'Wiggy' Smith, Stu Philpotts, Johnny McGrantham, Dave Smith, Mickey Smith, Jim Weaver worked with him at West Drayton when he was my Cpl, Keith Parsons, Neil Cairns (Relay - was in SHAPE with him in 1984, good man), Stu 'Strike' McClymont and many more good guys, sorry guys....
Techies: 'Porky' Wiles (could he drink!!), Al Clayton
A Commcen is a Commcen; but working at SOC Madalena on Exercises was different and enjoyable.  Siggewi, the relay, well one 'tape ape' is the same as another!!
I enjoyed Flight Watch and the radio room, working with Cyprus and Decimomanu, brilliant work.  Also working 1151 MCU,  even though they did long sails in the Med, more like cruises!!
 
Steve Curtler at Ghar Lapsi
Shift working not good, as some idiot had us on a strange watch system, till the penny dropped with the daisies, 12 hour shifts, day & night 2 days off, now that I can work with.....
Gladiator club - best night of the week was Saturday night and the disco. Only 2 tracks worthwhile; Alex Harvey Band - Faith Healer and Peter Frampton - Do you Feel Like we Do.  After that you could take on the world.  Had the fantastic experience of hearing Frampton at the Newcastle Arena in the early 2000, a dream come true as he played this track then, awesome!!
Not being a sun worshipper, rock climbing was more my thing.  So before I got posted, got hold of a guidebook which the Marines had published, (thank you to 41 CDO).
 
H and Dave Durkin at Ghar Lapsi
Good climbing at Ghar Lapsi, Wied Babu, Blue Grotto and  Ghar Hasan.  We started a climbing club, meeting at Safi on a Thursday night; Jim Lawther (JT then Cpl TASF) whom I was with at Leeming on the MRT before Luqa.  Also Les Groves (Sgt MTD - well someone has to do it!!) and Steve Curtler (Chf Tech TASF) and  others.  Alternatively, did the Safi folk club also, Stu Philpotts was a regular musician and singer.
 
Hagar Qim - Neolithic temple
Had the fortunate chance to climb with an ex SAC TG11 Dave Durkin, then living in Norway, we put a new route in the Blue Grotto, well hard, great experience.  Dave then did an article for 'Climber and Rambler' magazine, being my claim to fame!!!
Excellent tour, Malta is well recommended to one and all.  Nice people, good beer (got used to it by then!!) do the Nike solution, 'Just Do It' and have a good time before you die .....
   

ANYONE KNOW THE DATE? (38 Sqdn Colours Presentation by Duke of Gloucester).
I received a message from Mrs Lynne Underwood (nee Hutton) along with a newspaper cutting showing her late brother, SAC Ernest (Ernie?) Hutton and Cpl T. Hughes. Both served with 38 Squadron
Both are from Worcestershire (Kidderminster and Droitwich).

Lynne says:
My only memories are of my late brother mr e.r.b. hutton, i have a paper clipping of him & a Cpl/t hughes when they were stationed in luqa malta . this picture was taken just before a parade where THE DUKE OF GLOUCESTER presented 38 squadron with a standard , if anyone can help me i need to know the month, or year this photo was taken and then i can try and print this photo from the relevant news paper.

N.B.
On 24 February 2015 Jim McManus sent me another, repaired, copy of the newspaper cutting. 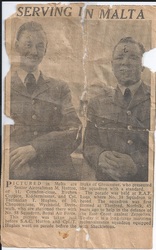 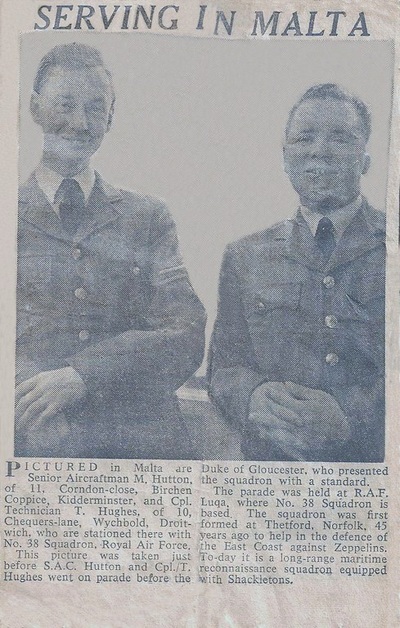 Thanks to Terry Courtnadge for sending this in 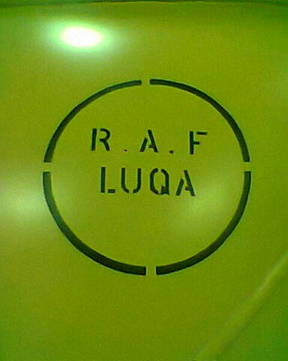 This is from an a/c towtruck that was abandoned and rusting away after the withdrawl. It was recovered and restored, now at RAF Museum, Hendon.

Nick McReady is on the guestbook. His father was Wing Cdr McReady, C.O. of  RAF Hal Far in the 60's. Nick was a schoolboy at the time and has great memories of living in Kalafrana House. 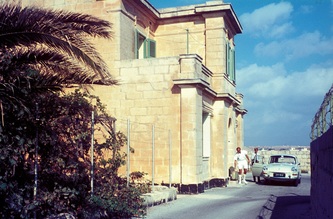 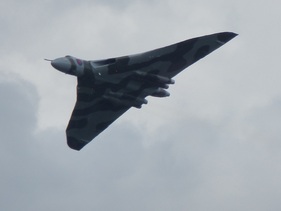 I visited RAF Luqa on several occasions on detachment with Waddington's Vulcans and Masirah once as Transit Sevicing Party back in 1972 when we had 4 Vulcans staging through on their way to Darwin to do live 21,000 lb. bombing - the last time they did so before the Black Buck operation.

In fact we ended up staying there for rather longer than originally
intended, our initial transport (a Britania) having gone sick in Cyprus
and being 'dumped' in Masirah 24 hrs. later than intended by C130 with no kit whatsoever - our small packs having already been used in Cyprus.
We managed to beg a pair of shorts each off the guys and 2 days later our kit was flown in by a 35 Sqn Vulcan from Akrotiri. You can't imaging the delight we felt to put on clean KD fresh out of the pannier and icy cold!

A couple of days later we got a lift off a staging C130 taking Marham ground crew out to Gan where the next day we managed to get ourselves onto a VC10 on its way to Changi - at the expense of a family making their way to re-join their husband/father.

After 5 wonderful days in Singapore with nothing to do we were eventually flown out to Darwin on a C130 from Fairford, where the JENGO said "You've had a hell of journey out here, you'd better have 2 days off, lads!" That was a great "Moonflower" as East-abouts were known.

The last time I was in Luqa, I  was a Corporal LTech F/S and had been 'borrowed' from MEAS by 9 Sqn. as they needed an NCO 'insty'. Immediately upon my return I found that I had been granted my request for a Last Tour on 50 Sqn. which had previously been refused as I was screened for 5 years on the Vulcan Flight Simulator at the time.